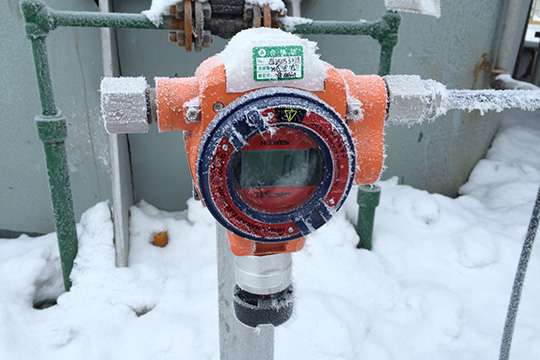 1. Define the detection purpose
In order to carry out fast and accurate selection of the gas control alarm sysem, the purpose of detection should first be defined. For different detection purposes, the measurement range of the gas alarm varies greatly, ranging from 0 to 100%LEL for explosion detection and 0 to hundreds of PPM for toxic gases.

It has a variety of special sensory selection
(1)For detecting comBustible gas containing sulfur, silicon, phosphorus and other elements, the user should select anti-toxic catalytic sensor or infrared sensor. In the presence of sulfide, the sensitivity attenuation of the anti-toxic catalytic comBustion sensor is relatively slow, and the service life of the sensor can be several months to more than 1 year in the presence of a small amount of toxic substances. Infrared sensor is completely not toxic, the service life can reach more than 5 years.
(2)For detecting diesel and kerosene which are extracted from the oil of high boiling mixture of hydrocarbons, the user is suggested using gas detectors for low gas concentration. Under the room temperature, the volatilization of diesel oil and kerosene is slow. Even in the case of the sense of smell can be perceived, the gas concentration in air is difficult to achieve LEL level. To facilitate timely discover and deal with oil leakage, semiconductor sensor or PID sensor is recommended. But the price and maintenance cost of PID sensor is very high, so semiconductor sensor is the best choice for detection of diesel and kerosene.

3.Wiring choice of the alarm system
Gas detection and alarm system can be roughly divided into two wiring methods of 4-20mA system and RS485 system.

4-20mA system
There is an independent signal loop between each detector and the controller in the line-dividing system, and all detection signals are input to the controller in parallel. This method is also called point-to-point connection. The signal transmission of wire dividing system is reliable, the detectors are relatively independent, the operation of any circuit is not affected by the failure of other circuits, and the power supply configuration is simple, without strict restrictions. However, the wiring system is complicated with high installation and construction cost and heavy workload, especially when the number of detectors is large or the distance between the detector and the controller is far, the wiring is very complicated. The wire dividing system is suitable for the places where the number of detectors is small, the distribution is not concentrated, the distance from the controller is close, and the safety requirement is high.

RS485 system
This system usually consists of two or four wires forming a Bus loop. All detectors are connected to the Bus loop. Each detector has its own independent address code, and the controller accesses each detector according to different address signals. The Bus system USES less lines, is easy to construct, and has strong expansibility. It can be easily integrated with other equipment through input/output modules. Moreover, the expansion is simple and most of them do not need to change the structure of the controller. However, the reliability of the Bus system is relatively low. The failure of one detector may affect all the subsequent nodes. Because each manufacturer's Bus communication protocol is not unified, product interchangeability is poor; In addition, due to the existence of wire voltage reduction, the power supply of the Bus system is usually more complex. When the number of detectors is large or the distance from the controller is relatively far, wangwang needs to configure multiple dc power supplies to supply power to the detector by on-site nearby power supply. Therefore, the Bus system is suitable for the places where the number of detectors is large, the distribution is concentrated and the distance from the controller is relatively long.

4.The choice of communication mode of alarm system
The choice of communication mode is related to the wiring mode of the system. The 3-wire system or 2-wire system of 4-20mA signal transmission mode is generally adopted in the gas control alarm sysem of the line-dividing system. The RS485 system is a digital signal transmission.

4-20mA signal transmission mode
4-20 mA signal system is international standard for analog signals. Industrial control instruments often use 4-20mA current to transmit analog signals. This kind of signal transmission mode has good anti-interference performance and long signal transmission distance. 4-20mA current signal has two types: two-wire system and three-wire system. The signal wire of the two-wire detector is also the power cord, which saves wiring and has small current. Two-wire instrument consumes little power and is not suitable for complex functions. Large power circuit design, and single signal output, can not configure contact signal as alarm or state output. The three-wire detector is powered by external power, which is powerful and can realize some complicated instrument functions, such as backlight display, contact output, local sound-light alarm and so on. Catalytic comBustion gas alarm because of its large working current, usually for three-wire 4-20mA output.

Detector + gas alarm controller
This system is low cost, easy to implement, and independent of other control system Settings, when other systems due to failure or maintenance power outage, gas control alarm sysem can continue to operate without being affected, good safety. The disadvantage is that the display is not intuitive enough to realize several systems of monitoring and management.

Detector + DCS/PLC
The 4-20mA signal of this kind of structure gas detector is directly connected to DCS/PLC control system, and displays and alarms on the DCS/PLC end. DCS/PLC software can be intuitive show the position of the probe distribution, convenient rapid positioning, real-time database and be able to upload data to the plant, but the system cost is high, and more complicated to implement, if the hardware configuration and the project is not suitable, will bring some advantages of system.

Detector + gas alarm controller +DCS/PLC
This system structure can not only realize the centralized monitoring of multiple regional systems, but also visually show the distribution position of detectors. When DCS/PLC for maintenance, maintenance, the system's gas alarm controller can continue to display and alarm, but this system structure also has more than one investment shortcomings.